MBG-10 is micro bio-gas is created in different forms, which agricultural biogas is produced. Substrates for biogas production can be any organic substances that are adequate to use during the process of methane fermentation. The electrical power of this type of installation is about 10 – 45 kW.
Substrates – materials for biogas – can be derived from different sources. It can be residue from breeders or agriculture production that is formed on farms (liquid manure, animal or bird droppings, silage of grass or other plants, etc). It can also be waste from agri-food processing or other food production (slaughterhouses, processing plants, bakeries, collective feeding places).
The process of biogas was taken from nature. One of the natural ways that biogas is formed is presented in the picture down below:

In simple terms, the main elements and the operation of a biogas plant can be presented as shown on the photo down below: 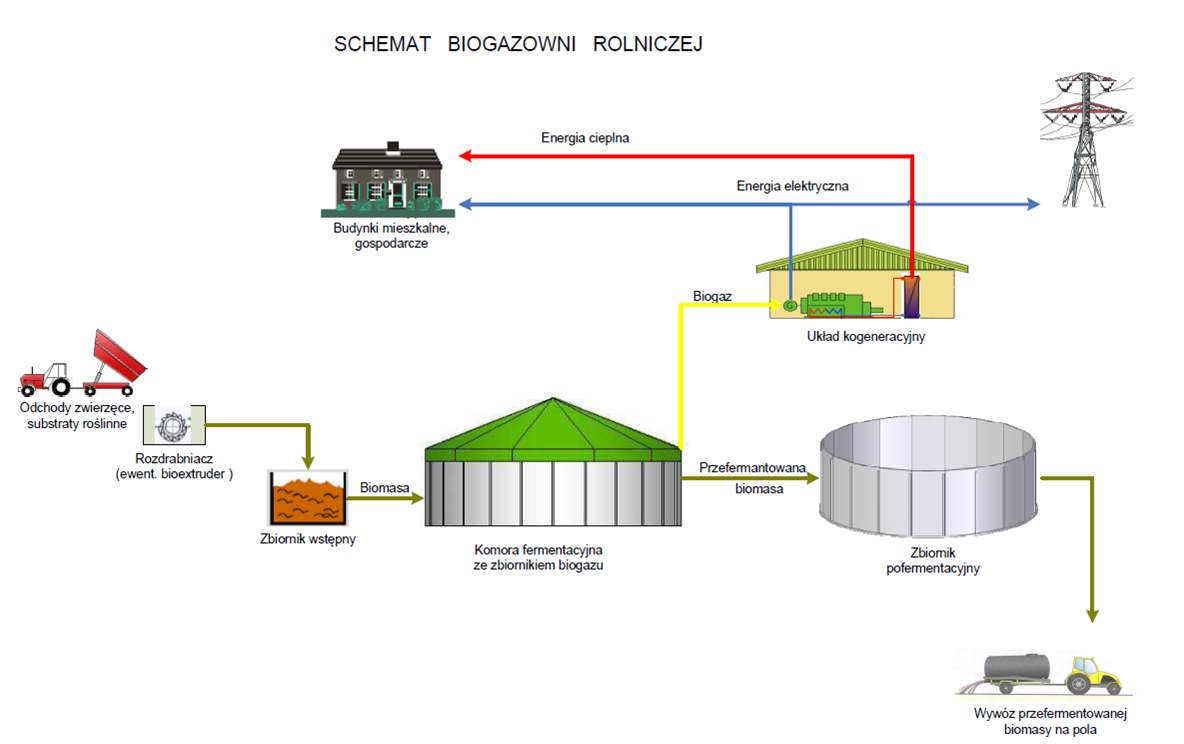 When it comes to the idea of a biogas plant, it is about separating and integrating certain basic elements, equipment and devices that are typically found in these types of installations. In certain circumstances they are solutions used by us that allow from the mobility of the whole biogas plant. The idea that we were guided by, is shown in the image below: 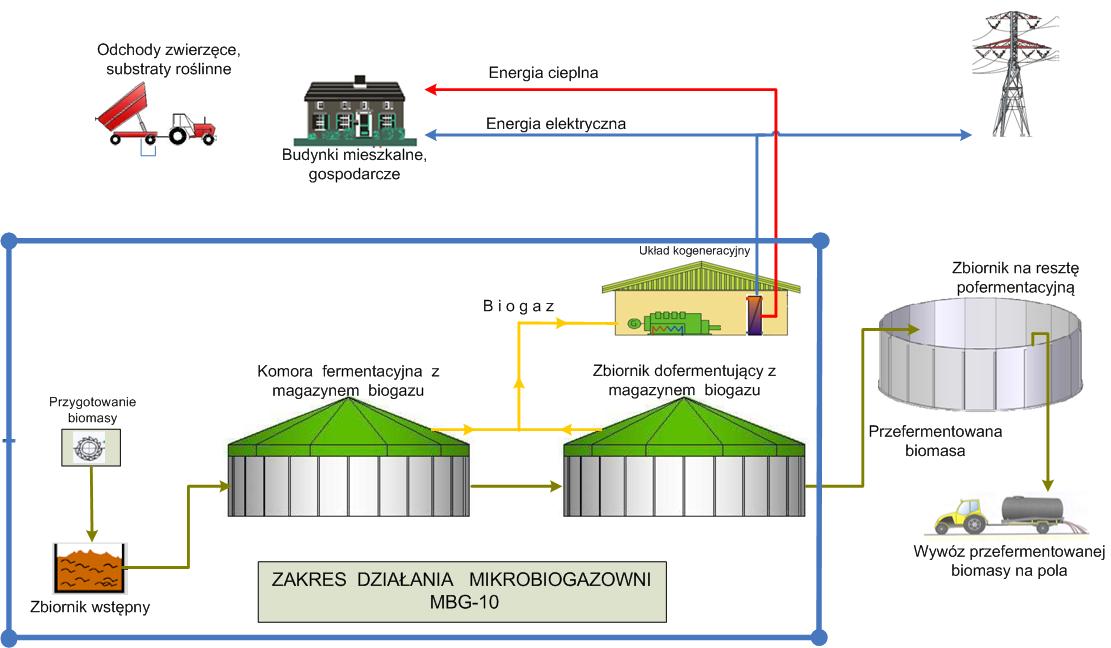 The produced biogas is used to produce electricity and thermal energy in the co-generation system. The co-generation system is a device that consists of a combustion engine that is modified to burn biogas and a AC generator. The thermal energy from cooling the engine and combustion is used to heat mass in fermentation chambers, any surplus can be used for other purposes. The after fermentation mass is a nutrient filled fertilizer, that can be used for fertilize soil.
One main benefit of using MBG-10 is the possibility of local electricity and heat generation that is formed in a given place. The execution of MBG fermentation chamber in the form of a tank or a sea container allows for easy transport used regular road transportation. MBG is set up as ready to go package (fermentation chamber + co-generation). The only necessity is to connect it to the proper electrical and thermal energy.

Annual amount of energy produced with MBG-10 depends on the type and the amount of substrate, on average it can be:

Warning: the cost of purchasing electricity 0.5 zł/ kWh, while the cost of heat is 0,1 zł/ kWh.

Designing microbiogas plants such as MBG we implement a variety of different construction solutions. The starting model was based on the cuboid fermentation chamber around the sizes of a sea container (2,5x2,5x12,0 m). Around 60 m3 of biomass can be fermented in this volume. This amount is enough to produce biogas capable of supplying a co-generator with the 10kW. 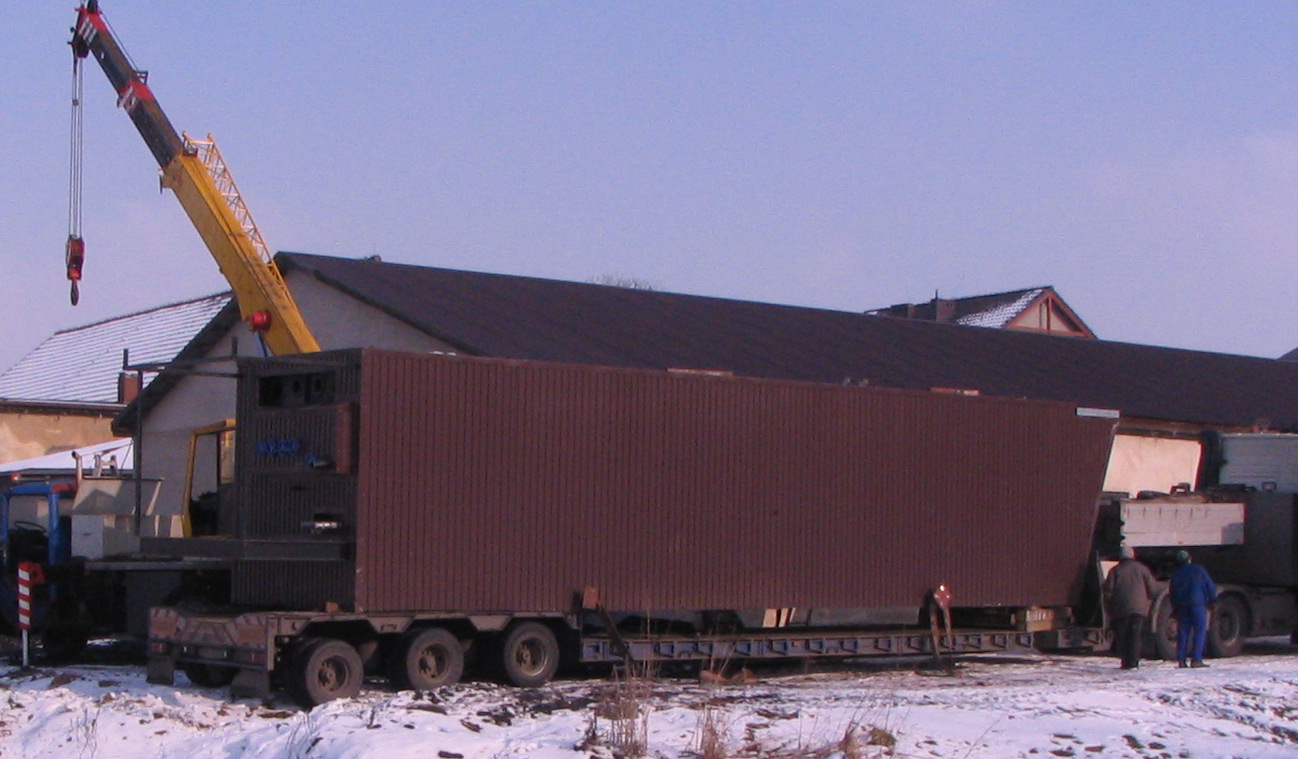 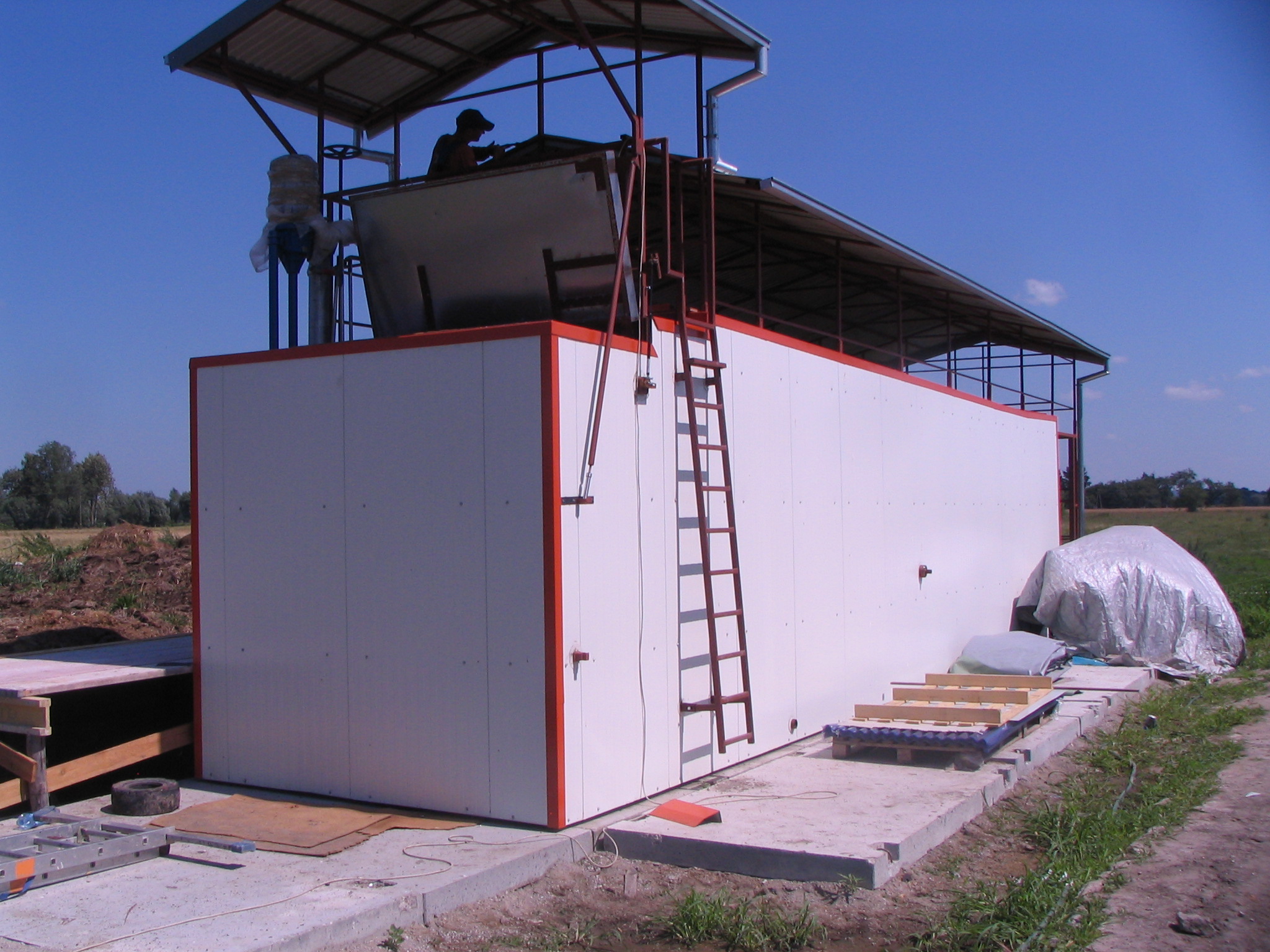 Another solution for chamber container

In other scenarios we suggest fermentation chambers in the form of a lying steel tank with a circular cross-section (e.g based on a railway tank): 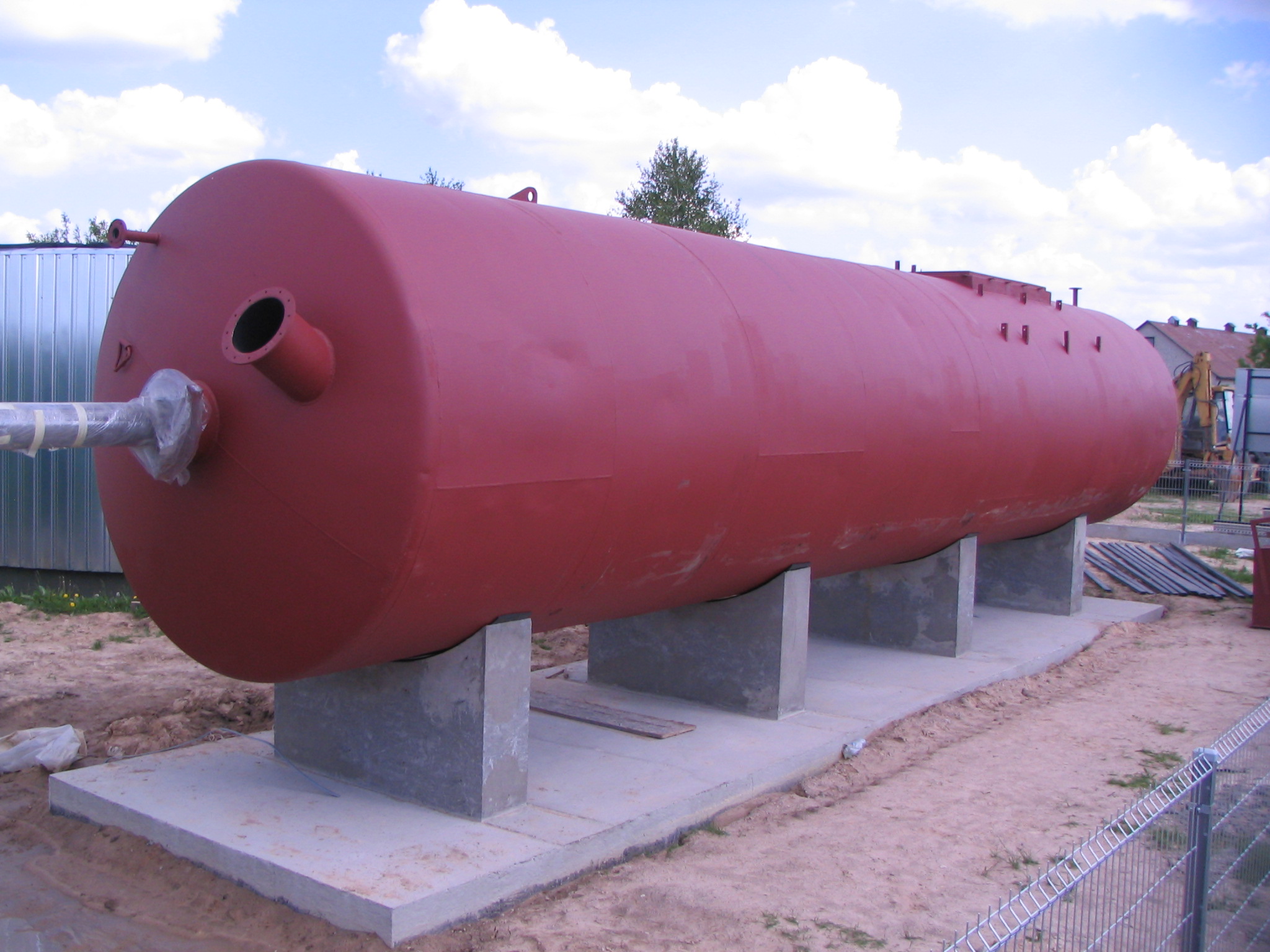 Fermentation chamber of the microbiogas plant after tansport to the workplace.

After choosing a solution for a given location (type of fermentation chamber), we design and we provide all the other elements of the biogas plant. Generally these elements are:

All design, production and assembly works are carried out in close cooperation with the investor, taking into account needs, suggestions and possibilities.

One of variations in our work that we offer adaptations of the infrastructure that is already owned by the investor (tanks, installation) and ‘fitting’ the bio-gas plant into the existing environment. This method significantly lowers the investment cost, it is a bit more difficult to implement but it is much appreciated by most investors. In circumstances where only a small amount of land is available to build a biogas plant, this is often only way out.
Below is a fragment of the construction documentation of a biogas plant "fitted" into an existing farm. The existing liquid manure tank and specific building layout were used. Some equipment was placed outside the basic structure of the biogas plant. 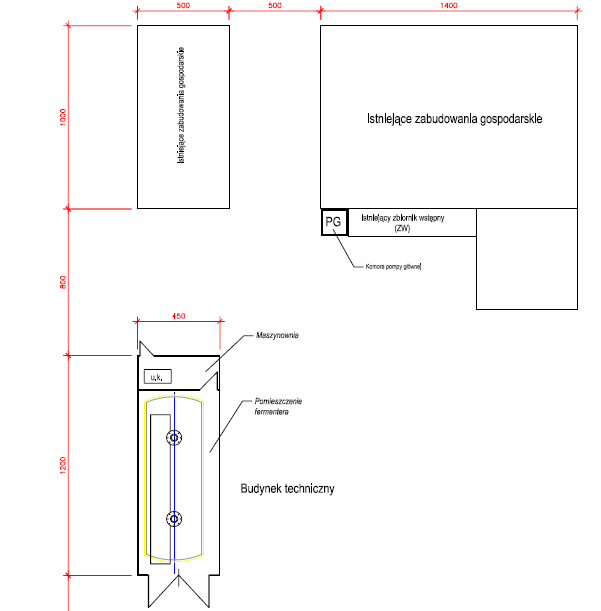